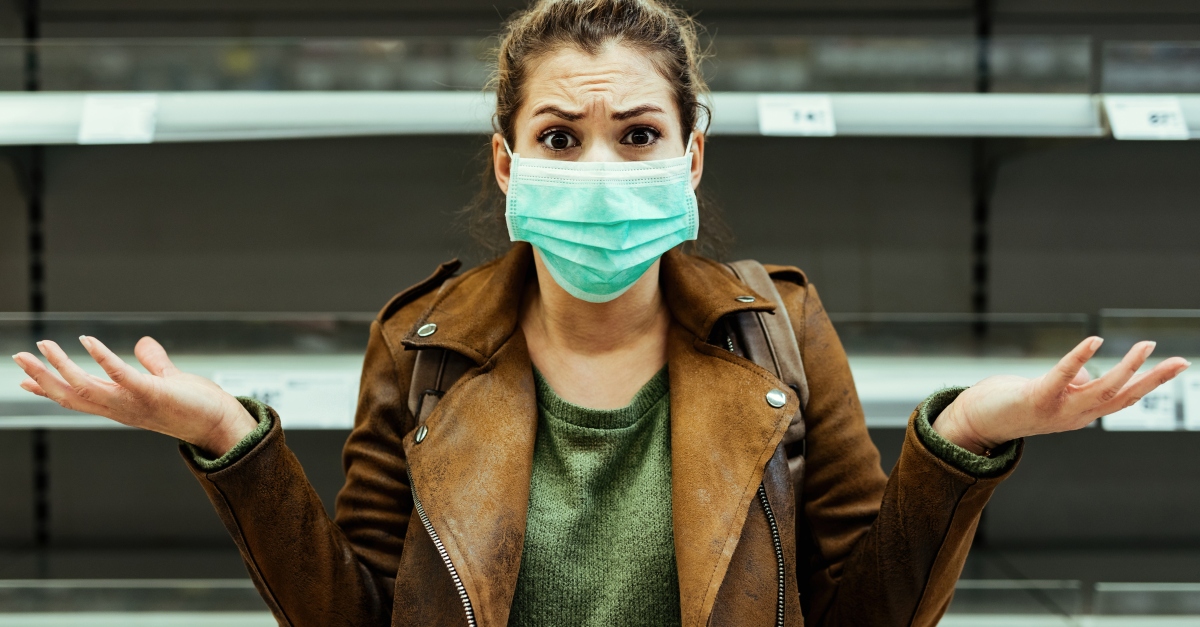 Now that we’ve been going through this mess for almost six months, certain areas have surfaced where—if this is all a big life test—we aren’t exactly getting an “A.” For those who follow Christ, there is one area in particular that deserves attention. It is giving in to the temptation to turn inward, to give ourselves over to our emotions and felt needs in ways that aren’t spiritually healthy.

The apostle Paul is a helpful corrective here. If anyone knew what it meant to endure hardship, it was Paul. This is how he once described his life circumstances:

Yet when, once again, Paul was suffering – this time imprisoned in chains in Rome – he wrote these words:

“And I want you to know, my dear brothers and sisters, that everything that has happened to me here has helped to spread the Good News. For everyone here, including the whole palace guard, knows that I am in chains because of Christ. And because of my imprisonment, most of the believers﻿﻿ here have gained confidence and boldly speak God’s message﻿﻿ without fear.” (Philippians 1:12-14, NLT)

Paul was under military guard, which meant he was not simply imprisoned, but actually chained to a soldier. The guards selected to be chained to prisoners were the worst of the worst. Ignatius, a Christian of the 2nd century who wrote of his own imprisonment while on the way to execution, said he was chained night and day to men he could only call “wild beasts... [who] become worse [even] when treated well.”

So what did Paul post on his 1st-century Facebook page? How good what was happening to him was because it was helping advance the cause of Christ.

That was what he was thinking about.

You won’t find a single word about how awful prison was, how heavy and painful the chains were, whether he was cold, hungry, or had been mistreated. He wrote nothing to elicit personal sympathy; nothing that would reflect a preoccupation with self.

This raises something few people ever think about. That maybe instead of asking, “Why is this happening to me? Why aren’t things going the way I want them to go? Why am I stuck with kids working from home, having to wear a face mask, can’t go to the movies?”

Maybe the real question should be, “What can all of this hold for my love for others, and my love for God?”

Rather than focusing on all that isn’t going our way, all that we don’t like, all that we wish was different—which is letting ourselves turn inward—maybe we should focus on all that this could allow God to do in us, all that God wants to do through us. In other words:

What If We Were Determined to Turn Outward?

For most of us, our default position is almost always the same when it comes to pain and sadness, difficulty, and challenge: self-pity, self-preoccupation, and self-concern. We don’t think about the good that could come of it, much less how it might positively affect other people. Our goal is for people to feel sorry for us, sympathize with us, and feel our pain. And then, for us to wallow in it. To focus on all we don’t have, can’t do, isn’t going our way. How we’re inconvenienced or put out.

During This Pandemic, All of Us Have Lost Something

We’ve all lost a certain amount of our personal freedom and had our lifestyles impacted in ways that frustrate and debilitate. Some of us have lost income or even a job. Some of us have even lost a loved one to death itself.

Our chains are real. But no matter how real our chains are—and they were real for Paul—our choice to turn inward or turn outward is just as real. And it was impossible to be with Paul for five minutes and not know which choice he had made.

What would five minutes with you reflect?

If someone were to go on your Facebook page, read your thread of tweets, scroll through your Instagram posts, would they find an inward or outward focus? If they spent time with you in a Zoom meeting or a Facetime call, what would they say about your mindset and spirit?

Would they walk away being confronted in new and fresh ways with the power and presence of Christ?

After seeing you and listening to you, would they want to lead bolder lives for Christ?

If such a spirit seems almost incomprehensible, perhaps it is because we have a distorted view of the nature of our life in, and with, Christ. As Paul tried to explain to the Philippians:

“For to me, to live is Christ and to die is gain. If I am to go on living in the body, this will mean fruitful labor for me. Yet what shall I choose? I do not know! I am torn between the two: I desire to depart and be with Christ, which is better by far; but it is more necessary for you that I remain in the body. Convinced of this, I know that I will remain, and I will continue with all of you for your progress and joy in the faith, so that through my being with you again your joy in Christ Jesus will overflow on account of me.” (Philippians 1:21-26, NIV)

To Live Is Christ and to Die Is Gain

Is that our life motto? Not usually. Left unchecked, a more accurate rendering would be “To live is me and to die just sucks.” And right now, that “living for me,” turned inward engagement of life is the spiritual pandemic we’ve allowed the virus pandemic to spread.

We’re not thinking about how God might want to use this, or use us, during this time. We’re just consumed with what we want, what we need; how we want to be served, ministered to, and fed.

“I just can’t worship that way.”

“I can’t get anything out of it that way.”

Do you hear how turned inward that is? How that makes it all about us? What if instead, we said:

“I know people who would never darken the doorstep of a church, but they might check it out online. Since everybody and everything is online, this is my chance to be an invitational machine!”

“I can’t be a public worshiper right now, but that just means I can work at being a private worshiper. And if I read the Bible right, that’s the heart of my relationship with Jesus!”

“I can’t engage others the way I would like, but I can take it upon myself to be someone who reaches out in every way I can!”

If all we can do during this time is complain about our spiritual needs not being met, we have given ourselves over to…ourselves.

In Greek mythology, Narcissus is the character who, upon passing his reflection in the water, becomes so enamored with himself that he devotes the rest of his life to his own reflection. From this, we get our term narcissism, the preoccupation with self. The value of narcissism is the classic “I, me, mine” mentality that places personal pleasure and fulfillment at the forefront of concerns.

In so many places and in so many ways, a spiritual narcissism has invaded the Christian community. Eavesdrop, for a moment, on how some Christians talk or the kinds of things they post:

“I want to go where I’m fed” – not where we can learn to feed ourselves, much less feed others.

“I need to be ministered to” – as if ministry in the life of the Christ-follower is something that happens to us, instead of something we make happen through us for others.

We walk out of a worship service and say, “I didn't get anything out of it” – as if the purpose is what we got out of it, instead of what God got out of it.

Where Did That Come from? It Wasn’t from Our Leader

And the truth we should all celebrate is that the church-going online has meant the message of Christ reaching millions more than at any other time history.

In other words, I thank God for the chains.

Adapted from a message given through the online campus of Mecklenburg Community Church as part of the series “Spiritual Survival in a Pandemic World.”

James Emery White is the founding and senior pastor of Mecklenburg Community Church in Charlotte, NC, and the ranked adjunct professor of theology and culture at Gordon-Conwell Theological Seminary, where he also served as their fourth president. His newest book, Christianity for People Who Aren’t Christians: Uncommon Answers to Common Questions, is now available on Amazon or at your favorite bookseller. To enjoy a free subscription to the Church & Culture blog, visit ChurchAndCulture.org, where you can view past blogs in our archive and read the latest church and culture news from around the world. Follow Dr. White on Twitter, Facebook and Instagram @JamesEmeryWhite.

This content first appeared on Crosswalk.com and is used here with permission. To view the original visit: https://www.crosswalk.com/blogs/dr-james-emery-white/our-spiritual-pandemic-of-narcissism.html

Together in Heavenly Places - Streams in the Desert - October 28